After watching the keynote of the //BUILD/ event last night (due to the time difference it already was evening here in Germany) I decided to go to sleep first and then blog about it. Partly because the tools and downloads wouldn't be available for another few hours, and partly also because getting some time between you and an exciting event helps with thinking clearer.

If you haven't watched the keynote yourself, I recommend doing that to see for yourself what's new in terms of both hardware, software and of course software development on Windows 8. The video can be found on the BUILD website linked to above. If you want to get up and running quickly without watching 2.5 hours of video, take a look at the bullet points compiled by Michael Crump.

I have to admit that during the first few minutes, I wasn't exactly excited. At first there seemed a lot of marketing talk and buzz words, and the first live demos went rather clumsy, with some features failing at the first attempts or not working at all – that didn't leave the best impression. Surprisingly, things skyrocketed quickly after that, and my excitement just went along. Not only was it super thrilling to see the "big things" presented, like all the new hardware support, platforms and devices, or the brand-new Metro interface, but also the smaller features and improvements all over the place – unlocking a computer by tapping on an image, auto-spellchecking everywhere, an overhauled task manager, better multi-monitor support, things like that.

Of course, the huge changes and additions coming up probably will be what makes people most excited – for example, after the cloud integration using Windows Live was demonstrated, with the possibility to sync settings and personal data between PCs or to access data located on other machines, first tweets almost instantly started questioning Chrome OS. Features like the Windows Store will not only be a great new way for developers to market their applications, but it will also be a great feature for the users, because the certification process of Windows Store app adds a huge amount of security for them too. The full touch support and the seamless flow through multiple applications and system dialogs that is blurring application boundaries in a similar way than Windows Phone does creates a whole new user experience.

And of course the most spectacular feature for demos, the incredible boot times, is something that simply leaves you open-mouthed even when you're used to Windows 7's already improved boot performance. Booting a laptop in the time it takes to open the lid is just amazing news.

The great news of course did not stop at that, and continued for us developers. Something really a lot of people have been waiting for has now become reality: Expression Blend supports HTML and CSS. A new version of Visual Studio enables you to create those Metro style apps from built-in templates, and integrates with the submission process to the Windows Store – well done. A new API layer named Windows Runtime (WinRT) exposes all new features to whatever language you want to use, and the upcoming IE10 will further improve the already great version 9 of Microsoft's browser.

To me personally, the most important news of course was the confirmation that developing for the Metro style UI is still possible using .NET related skills: XAML and C#. I was pretty confident that this would be the case even after the "Windows is going HTML" storm of indignation from developers lately, and several rumors and leaked information already hinted at that, but still – getting the official confirmation was very reassuring. Here is the crucial diagram showing the new situation: 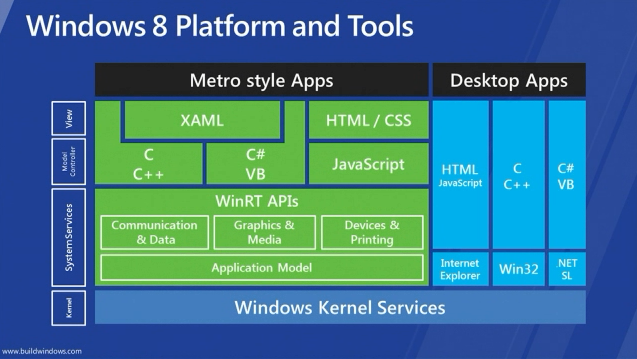 Of course that is "keynote technical level" and doesn't accurately show how C# is used to access the WinRT APIs (directly? .NET? Silverlight?), but later on the demos showed how to port an existing Silverlight application, so it became a lot clearer what the architecture looks like. With the upcoming detail sessions I think we'll see a lot more information, and of course you can also download the developer preview to start testing yourself (more on that in the next post).

In the end, I walked away from the keynote super excited about the things to come, and that didn't change after consulting my pillow. I'm more confident than ever that XAML-based technology (I don't want to call it Silverlight or WPF at this point) can and will play a significant role for developers, and that we will see very interesting applications and appliances with Windows 8 in the future.