Today the Windows Phone team has publicly announced the beta of App Studio, a new tool to enable everyone to build apps, regardless of their experience. App Studio focuses on the content and lets you quickly transform an idea into a finished app without having to care about all the involved technical details. A guided experience leads you through the basic setup, customizing your content and adding final touches to a result that can be published to the Windows Phone Store. 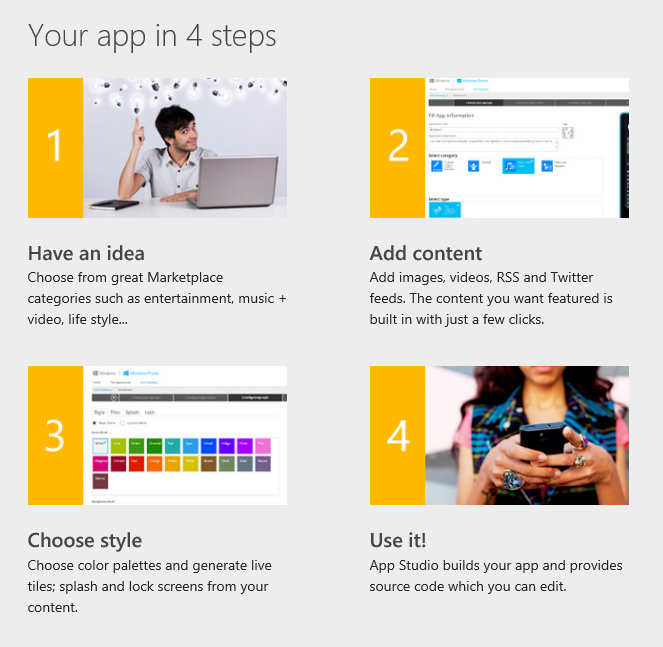 App Studio lets you add your own data, either static or as dynamic content hosted in the cloud as well as existing sources like RSS feeds or video searches. It has support for live tiles, custom styles and supports rich HTML content too.

More than a toy

If you now think that App Studio is a tool mostly for hobbyists and developers that are new to Windows Phone or with little experience, you are certainly right. But if you are a more experienced developer there are various other ways you can put the tool to use! I've never seen a way to prototype a basic app faster than this – choose a template and you literally have a fully working app that is delivered to your phone with just a few mouse clicks, right from within the web interface.

Now, one of the interesting details is that App Studio also allows you to download the source code of your app and do whatever you want with it. If you take a closer look at that code you'll be pleased to see that even though it's all generated it makes use of state-of-the-art techniques like MVVM or Dependency Injection (using Unity as an IoC container). The source is pre-configured for package restore and pulls in external dependencies via NuGet where possible. Some included helpers and service implementations make it easier to get going, and it even uses fake implementations for its data sources for design-time support – all in all, something to build upon if you're interested in extended the generated code and taking it to the next level.

It's still beta, handle with care

Remember that App Studio is not final yet. But although this means you might run into the occasional glitch every now and then, it also gives you the chance to provide feedback and make yourself heard early on in the process, to contribute and help build something new and exciting.

I was surprised how nice this concept turned out, and I'm curious what this will evolve into, and of course what people will create with it – have fun!