Add version info to your builds in TeamCity Thoughts on Microsoft, and Blazor

A while ago, when I came back to my computer, it had force rebooted due to outstanding Windows updates. That's always a hassle, because the feature to automatically restore your last open applications is, frankly, a joke. It fails to restore at least half of my typical apps in use, and the Windows then are usually all over the place in the wrong positions. But that's OK, updates are important, and we at least have the option to being only bothered "outside active hours". This time however, I was in for a surprise: a particular chat in Microsoft Teams got corrupted and I wasn't able to restore it, no matter what.

The interesting part was that in the chat list itself, the one-line preview correctly showed the last message we had exchanged. But in the detail pane the most recent content was from about a week earlier: 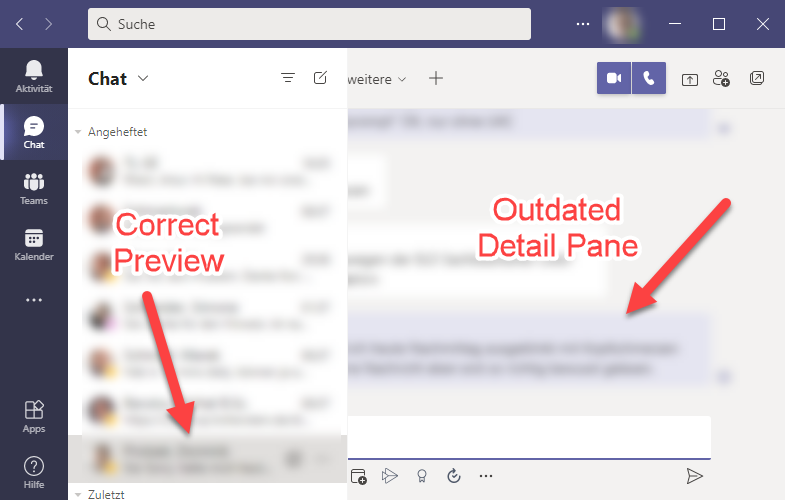 The chat did show up correctly in the web version of Microsoft Teams, but not in the desktop app. Curiously, closing and re-opening the app, and even a full reboot of the computer did not change anything for the better but made it even worse: With every attempt to fix it, a few more recent message vanished and couldn't be restored anymore (while the preview still stayed correct).

Hoping for self-healing powers of the AI gods, I ignored the problem for a while, until I realized that this wasn't going to happen. A few minutes of googling with Bing later, I realized you can clear the local cache of Microsoft Teams by removing %appdata%\Microsoft\Teams completely, or at least by doing the following:

That instantly fixed the issues for me.

That last point is the most disappointing, simply because people have voted for a feature like this for more than three years but it's been more or less ignored until now (whatever "under review" means).

When it comes to proper user experience of consumer products, always imagine what it would mean to navigate your 80+ years old grandparent to the right place, over the phone and without seeing their screen. It's not so feasible to "just go in and clear some folders" in your roaming profile data then, is it?