Add version info to your builds in TeamCity

To properly identify what build of your application you're actually looking at, for example to double-check what's been deployed on a machine, version numbers are a good utility. Manually setting or incrementing versions is error-prone though. Also, from a technical point of view it would be much more desirable to get more details about the exact source version used, like branch and commit hash (for Git). The latter cannot be known before comitting your work, so manually entering this as part of your developer workflow is not an option anyway. A much better way is to let your CI pipeline do this automatically. I use TeamCity for this, and document the required details in this article - mostly as a reminder to myself, should I ever need to look it up again.

In TeamCity, you have dozens of variables (parameters) at hand that contain all sorts of information about the environment and details on the current build. You can use these to pass them around, for example to dotnet during your builds, but unfortunately most of these parameters need to be optimized, trimmed or parsed, to achieve what you need. The basic idea for a workflow is:

For the first step, PowerShell is a great tool that also nicely integrates with TeamCity.

Add a build step to your build configuration, and use something like (adjust for your environment as needed):

Some interesting details of this are:

One thing to note is that you need to pre-define your custom parameter also in the "Parameters" section of your build configuration, or you won't be able to run the builds.

Once this build step is complete, you can use the custom parameter in following build steps, for example in your "dotnet publish" logic. The reason I'm using the version suffix mostly is because TeamCity has built-in support for it in .NET build steps:

If you want to set the full version instead, that's also possible of course. You then need to pass the details directly to msbuild using the "Command Line Parameters" options of the build step, using the well-known "/p:" option of msbuild/dotnet CLI.

The result is that the entry assembly of your application then will have the version details in the "Product version" field on the details tab of the file properties: 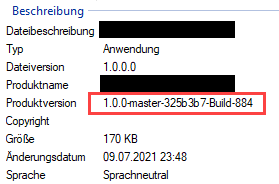 The prefix (here: 1.0.0) is coming from the respective element in your project file, or the default value like in my example if it isn't set at all.

The version is actually written (besides other places) to the InformationalVersion custom attribute of the respective assembly. Because of that, you can easily retrieve it in code using logic like:

Make sure you don't set the InformationalVersion element in your .csproj file. Apparently the command-line argument passed into the dotnet CLI does not take precedence; my experience is that the programmatically set version is not overwritten.

The version then can be used to be displayed somewhere in an info screen if your app has a UI, or simply passed on to service registrations or similar centralized management systems in distributed environments, to keep track of the deployed system landscape.