Attribute-based transient Tombstoning I know what you downloaded last summer

After having worked with the Windows Phone 7 emulator for a while, I finally received my real device today (a shiny Samsung Omnia 7). I first played with it for an hour or so and then wanted to unlock it immediately to give it a spin in Visual Studio. As it turns out, this is easy, but not as obvious as it should be, and I found it hard to find appropriate help when I searched the web, so I decided to give a quick summary here.

As a developer, you can manage your already registered Windows Phone 7 devices on your dash board in the App Hub. But you cannot add new devices there. Instead, it says that

Adding additional devices must be accomplished through Visual Studio

So naturally, I fired up Visual Studio 2010 and looked for an option to do so. I didn't find one. When I tried to debug an application with the "Windows Phone 7 Device" configuration, I received the following error:

No problem at all! I started Zune, tried it again, and... received another error:

Application launch failed. Ensure that the device screen is unlocked and device is developer unlocked. For details on developer unlock, visit http://go.microsoft.com/fwlink/?LinkId=195284. 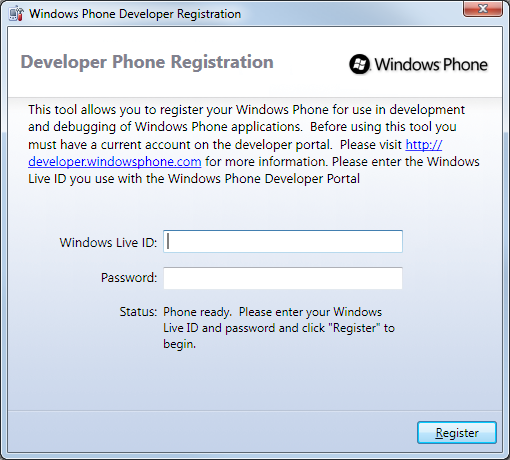 Make sure your phone is connected, Zune is running, and the start screen of the device is unlocked. When I tried to register the phone I first received additional errors and was prompted to "set the correct date and time" on the device (something I had already done). If you have similar problems, just keep on trying. I was successful with registering the device in the third attempt.

After that, you should be able to see the registered device in the App Hub:

And eventually, I was able to run my apps from Visual Studio on the device. Cool :-).